skip to main | skip to sidebar

A story I once told

My friend Rob always wanted me to tell him a story. I had one I really wanted to tell. I wanted to say the whole thing out loud and watch someone experience it for the first time.

So tell me a story. What do you got for me?
Well I want to tell you the story of how I got hurt. Do you even know what happened?
Yeah, Mike told me.
What did he tell you?
He said you don’t drink because you got shit-faced and jumped off a balcony.
Well, that’s true. But I want to tell you.

Sitting down at dinner that night – I started the story.

So it was the weekend of Bay to Breakers. We woke up still drunk from the night before. Started drinking first thing and then drank all day. Started blacking out around 3 probably? Maybe earlier, I really have no idea.

Hi can I get you two started with something to drink?
Water please.
We ordered dinner. I continued.

So then after a full day of drinking, and people splitting off one by one and getting separated, I ended up with just one other girl around… 10… I think. We were at some Sam’s Diner somewhere in the city. Then all of a sudden, she wasn’t there. I was at a Sam’s Diner at 10pm on a Sunday night. In the city. By myself. No money, no wallet. No cell phone. Nothing. All my stuff was in a backpack in Walnut Creek with Amy. So instead of calling Shauna or some other rational thing, I somehow convinced two guys that I didn’t know to drive me to Palo Alto because I thought my roommate would be home. She wasn’t.

The food came at this point. We started eating. I talk. Rob’s eyes get bigger and bigger the further I get into the story.

Ok so then I start to panic. I walked down to the apartment manager’s door, knocked but then just walked away thinking that was probably inappropriate.

So for some reason I walked up to the floor above mine…. the third floor. Not sure what my plan was at this point, but I checked to see if my neighbor's patio door was open. Their patio was directly above mine. Their door was open. So I’m standing there in my neighbors’ patio - people who I've never met, by the way. And in my totally freaked-out panicked state, I just HAD to get on my patio. We had a couch there. I could sleep there and no one would see me. So… my adrenaline took over and I jumped over the balcony.

Sarah when I tell you to tell me a story, this is exactly what I mean!!!!
Ok well it’s about to get worse.

So as soon as my hand let go of the balcony wall, I thought “Oh my god, I’m going to fall.” And then I blacked out.

So how did you get to the hospital?

Well I think I must have been screaming. I kind of remember doing that. I remember waking up on my stomach, on grass. I remember the pain in my back knowing that I shouldn’t move. So I think I just started screaming for help.

I have a vision of someone standing over me.

Then I remember knowing there was an ambulance. There was a flashlight in my face and someone asked if I was trying to hurt myself. I’m laying there looking up at the balcony I just fell... well, that I jumped... from and said “no but I could understand why you would think so.” They asked me what year it was…

Then in the ambulance I remember a guy telling me “Sarah this is going to hurt. Your bones are sticking out of your ankle and I have to put them back.” I remember I screamed but I don’t remember it hurting.

Oh and p.s., I’m wearing my 80’s jazzercise outfit from Bay to Breakers. I remember cracking a joke about it when they had to cut my striped tights off my legs.

Ok… so now I’m in the hospital thinking just my ankle is broken. No big deal.

But at the same time… I don’t know exactly, the memory’s all jumbled… I remember seeing lights go past above my head. I think this was when I was on the stretcher being brought into the ER… At some point I was aware of exactly how bad everything was. But I remember feeling really... calm. It was like some really weird moment of clarity where I knew everything was going to change but it would somehow be better. I don’t know. Weird.

And actually, saying that out loud just now... I bet a large part of that memory has to do with all the morphine they must have been pumping in to me.... Huh. I just now put that together... And here I thought I was having some divine intervention... well maybe that was part of it too.... eh, who knows.

Ok so anyways, my next memory is being in some room and someone saying something about surgery. And that was the first time I thought “so maybe I should call my parents?” I asked for a phone and I called my mom, told her I broke my ankle and need to have surgery.

But my mom was pissed. I had called her earlier right before the guys left me on my doormat. She realized how drunk I was and was absolutely unsympathetic. My mom and I have a history of me like this.

So when I call her at 2 in the morning on a Sunday night with a broken-ankle-need-surgery story, she said she wasn’t going to come. She had to work in the morning. I understood. So then I call my dad and of course, he came.

The look on Rob's face read clearly, "Your mom must have felt so guilty later."
I swallowed the lump in my throat and responded to his expression.

We both felt SO guilty. Her for not coming, and me for doing this to myself and the family. One of my first memories of my mom after everything... went down... was holding each others hands and forgiving each other. All guilt erased immediately. I think we both knew that we were going to need each other now more than ever, and we loved each other too much to do anything but forgive.

It was time for our movie, so I had to pause the story.

After the movie, Rob asked “Is there more to the story?”
I just let out a big sigh, “That really was just the beginning.” 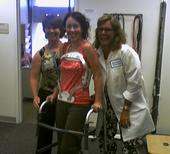 How I see it
First things first || The World Has Changed, People! || Eve and her Apple || Look for the Love in it || The Path

Funny to me
Bitter Betty? || The real truth about Cats and Dogs || Moderation who? || Twilight Confessional

Personal favorites
Live with Less || Letting them in, letting them go || No words